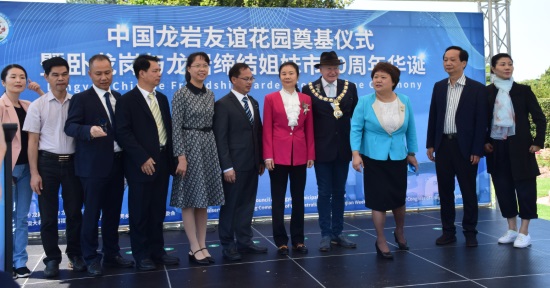 Plans are underway for a new cultural attraction within Wollongong’s much-loved Botanic Garden.

A ceremony was held in the Garden, Tuesday 29 October, to mark the announcement that Wollongong’s Chinese friendship city, Longyan, will give a feature within the Garden in a new area to be called the Longyan-Chinese Friendship Garden.

The gift marks the 20th anniversary of the sister city relationship between Longyan City and Wollongong City. While the details of the garden are yet to be finalised, the planting of a Yew Tree symbolises the first milestone in the project.

It’s envisaged the feature will bring a Chinese aesthetic to the Gardens, and there will be an opportunity for community consultation before the garden design is finalised.

“We’ve had a long-running relationship with Longyan City and the people who call it home,’’ Wollongong City Lord Mayor Councillor Gordon Bradbery said.

“It’s a relationship that has spanned two decades and was forged on the back of a desire to develop opportunities for economic and cultural development between our two countries.’’

The location of the Longyan-Chinese Friendship Garden will complement the much-photographed Japanese bridge. The bridge was donated to the people of Wollongong in 1993 in recognition of our ongoing sister city relationship with Kawasaki.

“We’re a culturally-diverse city and we’re a community that is proud of the fact people from across the globe have made it their home, including a sizable number of students from China at the University of Wollongong,’’ Cr Bradbery said.

“Whether you’re here forever or for a brief time, Wollongong has a way of staying within your heart. This new space within our Garden is another way to celebrate Wollongong’s global outlook and place in the broader cultural landscape.’’

It’s estimated that the design and consultation for the Garden will occur during 2020 and the Garden officially opened in 2021.