Our libraries will be closed on Thursday 26 January for Australia Day. Read more.

Connor Bowlen was authorised to occupy three hundred acres at a place called Ferrah Meadow on 13 February 1824. In 1841 two village lots from the Balgownie Estate were advertised for sale. The village established from this sale became known as Fairy Meadow.

The name Fairy Meadow can be attributed to the nature of the land in the area. The grassed open meadow lands, with the stream of fresh water running through, were noted from the early days for their "fairy-like" beauty.

'Para' is an Aboriginal word meaning river or creek. Para Meadow was the original name of the Fairy Meadow district. It was named after Para Creek which is known as Fairy Creek. Para Creek ran through the Paulsgove Estate, the property of J S Spearing. Mr Spearing used Para Creek to drive the first flour mills of the Illawarra.

John Buckland's Balgownie Estate of 1,920 acres was promised to him on 11 April 1829. He received his deed of grant on 11 June 1835. In 1839 the land was subdivided into 32 lots of 10 and 80 acres each. Advertisements for the sale of the land mentioned two important facts - its proximity to the Great South Coast Road (then under construction) and the presence of coal. 'Balgownie Estate' was one of the first subdivisions in the Illawarra and it formed the village of Fairy Meadow.

In 1838 Grant No. 33 was issued to Andrew Lysaght covering 60 acres on the western side of the Princes Highway and south of Mt Ousley Road. In 1858 the Lysaght's Red House Hotel was built (Cousins, 1994).

Joseph Guest, a Yorkshire miner, arrived in Australia in 1885. Two years later he married Sarah Dean. They purchased a parcel of land in Fairy Meadow from the person who was given the original grant. They reared a family of six children and transformed what was virgin bush into a dairy farm.

The Guest family farm as 40 acres and ran from Ellengowan, opposite Daisy Street, to Cabbage Tree Lane. Milk was delivered twice a day to customers in Wollongong and sent to Sydney each day by the Milk Train.

In the 1920s two sons, George and Fred, started a hire car service carrying passengers between Balgownie and Wollongong. They had three cars, a Buick 6, a Buick 4 and a Mitchell. With the advent of buses, hire cars went out of business, and Fred and George purchased the Popular Café in Crown Street. They obtained the agency for George Adams Rich Cakes, a well known firm based in Sydney.

The business outgrew the cafe kitchen and in 1928 a bakery was built at Fairy Meadow on a block that was part of the farm property. It was the only commercial building between Fairy Meadow School and Cabbage Tree Lane.

The Guest Cake business started in the midst of the Great Depression and the work was hard and the hours long. Cakes and pies had to be cheap so people could afford to buy them. Fred's three sons, Frank, Fred and Herb, followed him into the business and worked together for 55 years (Voice of the Seniors, Issue No.11, Feb 1992; Ryan, 1986).

In 1881 Beadle asked that the receiving office be made a Post Office as "besides being in attendance all day the same as a regular post officer … I am obliged to be in attendance at 9pm and 2am daily to exchange bags with the mailman. For this I only receive five pounds per annum".

About 125 letters were being posted weekly so approval was given for the office to become a Post Office on 1 April 1881. In 1883 the name was changed to Fairy Meadow Post Office. George Beadle died in 1886 and his stepson Edward Henry Gibbons succeeded him as postmaster (Local Studies Cuttings File).

The well grassed open meadow lands of the area attracted cattlemen to the district and there were some excellent farms on the 'Balgownie Estate'. Coal was also found on the property.

Mr James Spearing used Para Creek to drive the first flour mills in the Illawarra. Nearby he erected a windmill and later a steam flour mill was built at Fairy Meadow.

The opening of the Mount Pleasant Coal Mine in 1861 brought an influx of miners looking for work and homes. The mine operated a private railway line for the conveyance of coal to Wollongong Harbour until 1888. The opening of the Government railway allowed coal to be transported directly to Sydney.

In the 1800s a brickyard was opened on the northern side of Mount Ousley Road by W K Bate. It was the largest brickyard south of Sydney. All the machinery was driven by steam. The brickyard closed down when the supply of suitable clay in the area was exhausted (Cousins, 1994; Wollindex).

In the 1880s the latest road into the Illawarra was the Military Road leading from Fairy Meadow. The road cut along the mountain side and was free from the sharp corners of other roads in the area.

A bus service was started in the 1920s by the Dion family. The vehicle used was a Ford with solid tyres. Passengers sat on seats round the bus and faced inwards (Ryan, 1986).

This house is set amongst a streetscape of standard brick and tile houses. It is a medium sized single storey rendered brick building painted white with curved corners and parapets to the roof. It is an unusual building with a good level of integrity in the Inter-War functionalist style. The architectural style is uncommon in the Illawarra and the building is a good example of its type (City of Wollongong Heritage Study Vol. 3/5, 1991). 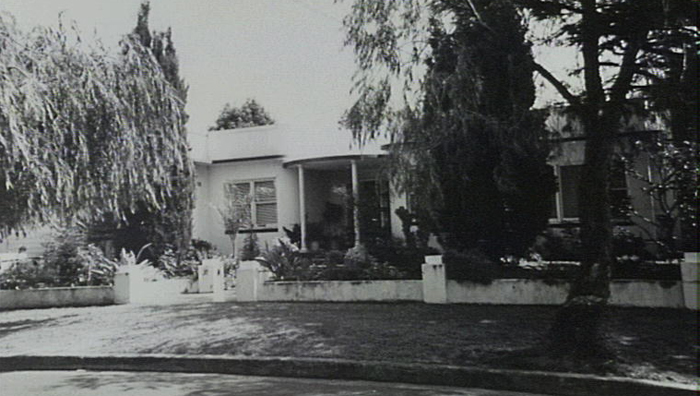 Fairy Meadow is part of the Cabbage Tree Creek catchment. It is predominantly urbanised with only the steeper sections of the escarpment remaining undeveloped.

Many years of catchment clearance and urbanisation have resulted in a highly modified and significantly degraded coastal catchment. Flooding has been a major problem in the area and over the last 50 years Cabbage Tree Creek catchment is recorded as experiencing some degree of flooding 16 times. Cabbage Tree Creek shares a common outlet with Fairy Creek next to Puckeys Estate in North Wollongong.

The steep slopes of the escarpment are dominated by wet-sclerophyll forest with warm temperate rainforest and patches of subtropical rainforest in the gullies. Most of the foothills have been cleared with only some remnant bushland and riparian stands remaining in the lower parts. Apart from selected reserves, the coastal plain is nearly all cleared of remnant vegetation (Peterson, 2002).

Ryan, Francis, (Frank), My Fairy Meadow: my memories of my early life in Fairy Meadow incorporating many memories of historical interest during the first century of the area's growth and development, Wollongong, NSW: F. Ryan, 1986.

Voice of the seniors: the voice of senior citizens in the Illawarra region of NSW, Wollongong: Tafe Outreach and Wollongong City Council, 1989-

Do have historical information, family stories or photographs of Fairy Meadow ?