All libraries will be closed on 1 June. Read more.

Windang is the southernmost coastal suburb in the Wollongong Local Government Area, set on the shores of Lake Illawarra and the ocean.

Windang is an Aboriginal word meaning "scene of a fight".

Windang is said to have been 'founded' by William Turnbull. Turnbull purchased some land in the area in 1920 and erected a two story building called 'Wyndang House'.

In 1926 the Post Office attached to this house was officially named Windang Post Office following a submission from Turnbull to have the name changed from the unofficial Lake Illawarra Post Office. The request was granted on the proviso that "the correct spelling be adopted namely Windang, which is that of the Island and Trigonometrical Station thereon in the vicinity".

The native name for Windang Island was "Kauyanggang" (Kanyangang) which meant "saved by the big bear who pulled the Island into its present position". The Island was called Windang Island as far back as 1848 when it was described in William Henry Wells' Geographical Dictionary as "an island situated at the entrance of Lake Illawarra, in the county of Camden, NSW".

The area now described as the suburb of Windang appears to have been designated as a Township Reserve on an 1834 map of the Illawarra drawn by the Surveyor H F White. This land is adjacent to the Five Islands Farm originally known as Illawarra Farm, which was granted to David Allan. The name was changed to Five Islands Estate upon purchase by William Charles Wentworth (McDonald c1988).

In 1896 a certain part of the peninsula was gazetted for defence purposes and in 1920 other parts for public recreation. Timber Licenses were granted on a timber reserve at the end of Perkins Beach (Parish of Wollongong map 12th ed).

In 1920 William Turnbull established his Belwarra Estate at the northern point of the Lake entrance. Windang House was built by Mr Turnbull in 1920 as a family home and guest house.

Tourism and recreational fishing have always been of major importance in the area. Guest houses sprung up in the 1930s to cater for tourists, and the Windang Camping Reserves have never ceased to be popular (Picturesque Illawarra: the garden of NSW, 1940).

Preparations for the construction of a breakwater on the northern side of Windang Island and a dredged channel began in 1890 to enable ocean going vessels to access the lake entrance. The scheme was abandoned in the early 1900s (Barwick-Hooke, c1988).

No matter what the costs of motoring were, touring and…..picnicking brought growth and commerce to more dispersed areas. In 1927 more than 2000 holidaymakers reportedly camped at the northern side of the entrance to Lake Illawarra (Urban Illawarra c1977).

The boatshed was built by Ben Howard in 1936. Attached to the shed was a shop and seafood restaurant which Mr Howard and his wife Mary operated (Neels, 1988; Harrison, 1993). 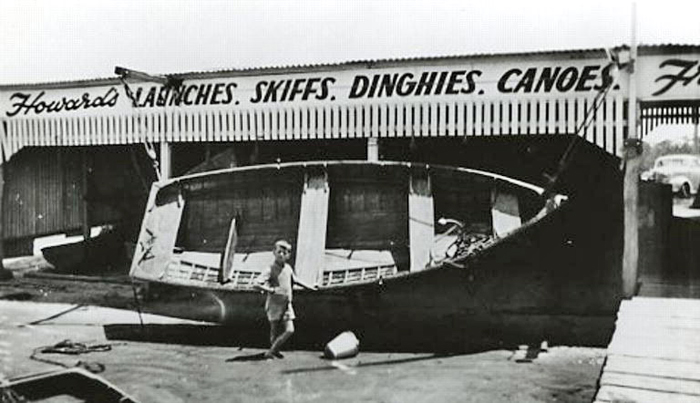 Windang House was a two storey wooden residence located near the Lake bridge. Originally known as Wyndang House, it was built by Mr William Turnbull in 1920 as a family home and guest house. A post office and Hooper's general store were attached. The house was sold in 1927 as part of subdivision of the land, and it remained as a guest house until it was demolished in 1980 (Illawarra Images).

In the past Lake Illawarra and surrounds have been degraded by urban and industrial development. Increased runoff into the lake including silt, industrial pollutants and nutrients such as fertilisers and sewage resulted in the lake losing its natural filters of wetlands and vegetation around its edges. The formation of the Lake Illawarra Authority and the foreshore improvement works undertaken has highlighted the ecological value of the public land around the lake.

Lake Illawarra Authority had the task of reviving and restoring the lake so that it would continue to provide an attractive recreational and tourism resource. The NSW State Government disbanded the Lake Illawarra Authority on 1 July 2014 and transferred the management of Lake land and assets to various management agencies, including Wollongong and Shellharbour City Councils.

Pelicans, Black Swan, Tern, Egret, Cormorant, Spoonbill, White faced Heron, Curlew, Teal, Ibis and Duck are the most prolific species of birds found on the Lake. The main source of food for these birds is fish, weed, microbes and worms found in and around the Lake's edge (Massey, 1991).

This small partly migratory seabird is listed as an Endangered Species on Schedule 1 of the NSW Threatened Species Conservation Act , 1995. A very small colony returns to breed every year on a site at Windang near the Lake inlet (NSW National Parks and Wildlife Service).

This is a nutrient found in the Lake which is important in the growth and development of many species of estuarian fish (Massey, 1991).

The weed growing on the lake flats provides food for a variety of fish and birds and is vital in the ecological food chain. If the weed beds are touched in anyway the impact would be devastating to the fish and bird life of the Lake (Massey, 1991).

Entrance improvement works have included the construction of an internal rock wall and an external sea wall through the surf to connect with Windang Island; installation of a sand dune extending almost to the island to create a shallow waterway as a bird sanctuary; and construction of a boat ramp and channel.

See Council's website for more information about the management of Lake Illawarra.

Do have historical information, family stories or photographs of Windang ?